Guidelines for Desert Tortoises in Captivity Federal Law: Agassiz’s desert tortoises held in possession prior to August 20, 1980 in Utah and prior to August 4, 1989 in Arizona, California, and Nevada (50 Code of Federal Regulations 17.11(h)) are not subject to the federal Endangered Species Act, provided that the purposes of such holding were not contrary to the purposes of the Act; and that the wildlife was not held in the course of a commercial activity (50 Code of Federal Regulations 17.4). Because Arizona, California, Nevada, and Utah have laws that prohibit the movement of Agassiz’s and Morafka’s desert tortoises out of state, such interstate movement is prohibited under the federal Lacey Act (16 U.S.C. 3372(a)(2)(A)). In addition, they may not be sold (50 Code of Federal Regulations 12.37 (a)(4)).

In California, it is illegal to sell, purchase, harm, take, possess, transport, or shoot a projectile at a tortoise (Gopherus) (California Fish and Game Code 5000). It is illegal to have a tortoise as a pet unless it was acquired prior to 1972. (California Fish and Game Code 5001). While there is no legal limit to the number of desert tortoises a California resident may possess in state, the California Department of Fish and Wildlife strongly discourages having males and females together in captivity or breeding captive desert tortoises.

In Nevada, desert tortoises may be legally kept as pets if they were held in captivity prior to listing under the Endangered Species Act (August 4, 1989 (50 Code of Federal Regulations 17.4, Nevada Administrative Code (NAC) 503.093). Progeny of legally held desert tortoises are protected from take under the Endangered Species Act (50 Code of Federal Regulations 17.4). Take is defined as to harass, harm, pursue, hunt, shoot, wound, kill, trap, capture, or collect, or to attempt to engage in any such conduct (section 3(19), federal Endangered Species Act of 1973, as amended). Possession, basic care, or non-commercial transfer of such progeny in captivity are not prohibited (16 U.S. Code 1532, 50 Code of Federal Regulations 17.3). NAC 503.093 requires that any desert tortoise not already held in captivity on or before August 4, 1989, must be acquired through an adoption program approved by the U.S. Fish and Wildlife Service and must be registered with the Tortoise Group. The release of pet or captive desert tortoises to the wild is illegal without prior authorization from the Nevada Department of Wildlife (NAC 503.135, NRS 501.105, NRS 501.181, NRS 503.597).

In Utah, a person must obtain a Certificate of Registration from the Utah Division of Wildlife Resources to legally possess a captive desert tortoise. Only one captive tortoise will be placed in each household and only to residences outside of Washington, Kane, and Iron Counties (Berry and Duck 2000, SWPARC 2019). The release of captive desert tortoises to the wild is illegal. Why a Captive Tortoise Should Not Be Released into the Wild

There are several reasons why a captive tortoise, including captive desert tortoises, should not be released into the wild. 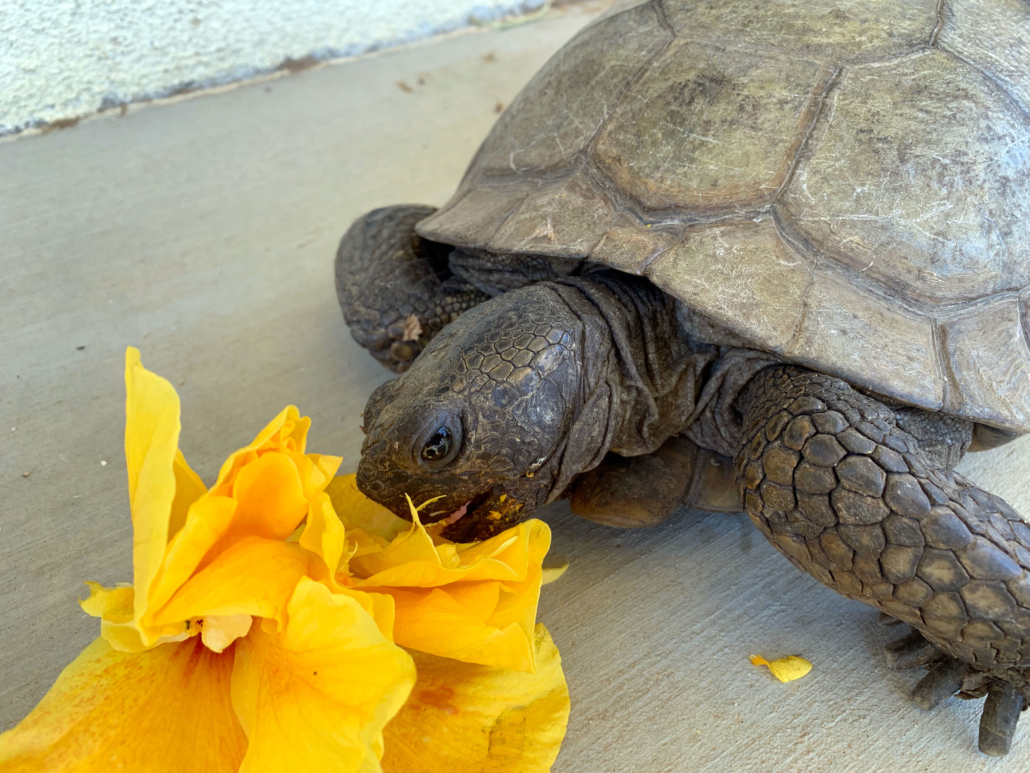 What to Do If You Found a Tortoise in an Urban Setting, If You Want a Desert Tortoise for a Pet, or If You Want to Find a New Home for a Captive Tortoise

Some custodians of captive tortoises may not be able to keep their pets; tortoises can live as long as humans can. Some people may want to become custodians. In other instances, a captive desert tortoise may escape from their yard in an urban situation, and the finder of the tortoise may want to keep it as a pet or find a new home for it. To learn how you can find a new home for a captive tortoise and help native desert tortoises from being exposed to potentially fatal diseases, please refer to the procedures described below for the state in which you reside.

The Arizona Game and Fish Department (AGFD) is the primary “adoption agency” for captive desert tortoises that cannot be released into the wild, because “captive tortoises can transmit diseases that can decimate Arizona’s wild populations.” The AGFD has a website that provides information on how to adopt and care for desert tortoises that occur in Arizona. Please visit the Captive Care section of azgfd.com to obtain information on adoption (Desert Tortoise Adoption Guide) and an application for adoption (Desert Tortoise Adoption Application). There is no adoption fee, but a donation amount is suggested.

There is a Desert Tortoise Adoption Hotline (844 896-5730) and email (email hidden; JavaScript is required) in Arizona. The Arizona-Sonora Desert Museum (520 883-3062, desertmuseum.org/programs/tap.html) in the Tucson Area is a state-sanctioned Adoption Facility.

The California Department of Fish and Wildlife has an agreement with the California Turtle and Tortoise Club (CTTC) regarding the placement and care of captive tortoises. The CTTC has local chapters that will work with you about placing tortoises in new homes (“adoption”), registering the tortoise, or retrieving unwanted captive tortoises (“re-homing”). These services are free; however, you are welcome to donate to the CTTC, as it is a nonprofit organization. For more information about how to adopt a captive desert tortoise or “re-home” a captive tortoise you are no longer able to care for, please visit the CTTC website at tortoise.org/cttc/adoption.html.

The Utah Division of Wildlife Resources has an adoption program for captive Mojave desert tortoises. For more information, please call 801-538-4701 or download/view the pdf.

Arizona, California, Nevada, and Utah do not allow for the transport or export of desert tortoises outside their respective states. At this time, the California Turtle and Tortoise Club and the Tortoise Group are unable to assist with out-of-state requests. Please contact your local animal rescue society, reptile and turtle/tortoise rescue organization, animal shelter, etc. and inquire if they can help with your request. To find information about how to maintain a desert tortoise in captivity, please visit the following websites: Berry, K.H. and T.A. Duck. 2000. Answering questions about desert tortoises: a guide for people who work with the public.